Miter saws are essential when making clean cuts and angle cuts on handiwork. Both professional carpenters and DIYers need the tool. Sometimes, you might find it tough to unlock your tool. If you are difficulty unlocking your saw, go through our guide on how to unlock a Dewalt miter saw.

I will show you how to unlock Dewalt miter saw using proven procedures. On top of that, you will learn some tips on how you can troubleshoot some common problems with Dewalt miter saws. Let us get into details. Unlocking your miter saw is easy if you have the right information. Here is a process of unlocking the Dewalt miter saw.

Step 1: Unlock the Down Position Lock

The Dewalt miter saw locked in down position requires you use a knob to control the lock. The process is straightforward. You just have to open the knob, and the lock will be deactivated.

This particular lock has a knob and pin. The unlock process doesn’t require any effort. You only need to pull or push the knob at the end of the pin, and it will be unlocked.

The process may differ depending on the model, but with most models, the outward movement of the knob unlocks the miter saw automatically.

The Dewalt miter saw angle lock has two locks instead of the previous locks which only have one. The two locks are the knob and the lever. Some models have the lever lock underneath lock and others at the top of the knob lock.

Nevertheless, the mode of operation is the same for all models regardless of the lever lock location. The unlocking procedure requires you unite the two locks to ensure the mechanism is ongoing.

This lock is simpler compared to the others. When the blade swivels from one to another. You can stop the movement by turning the knurled knob in the anti-clockwise direction or when unlocking it.

This type of lock requires you to operate the lever that is already spring-loaded. It entails using your index finger or middle finger, and you are through.

To adjust the pre-set angle, you need to unlock the swivel and lock. The process involves spinning the handle before activating the lever. The lever is activated by pressing it down so the custom angle can be pre-set.

A clicking sound is produced as an indication the angle has been set. You can then secure the set angle by using the knurled knob.

The process of unlocking the head of a Dewalt saw miter requires you to place down some pressure on the lever, pin, or knob. These parts are located behind the blade at the center point of the main base. You just need to pull the pinout, and the Dewalt saw miter head will be unlocked.

Step 8: Unlocking the Base

When the head is unlocked, you need to unlock the base. There is a knob on the Dewalt miter saw stand. The knob allows you to move the base and find the correct angle using the pre-set angle positions.

The bevel lock is available on Dewalt saws with tilting bevel. The sliding miter saw and compound saws have this particular lock. The first step involved in unlocking the lock is locating the lever or pin associated with the bevel.

From there, you have to pull or push the lever or pin so the locking mechanism can be released. This allows you to adjust the angle of the bevel easily.

You can find the lock on Dewalt sliding compound saws. The knob is located on the base of the sliding saw mechanism. You need to turn the knob in an anti-clockwise direction to release the slider so to help you slide the arm in and out.

Once the desired position has been achieved, you can twist the knob back to its position.

Unlocking the Dewalt miter saw process outlined above works for all models. However, you may experience some issues that may be related to the unlocking procedure.

Here is how you can troubleshoot some of the Dewalt miter saw problems.

The Saw Doesn’t Turn On 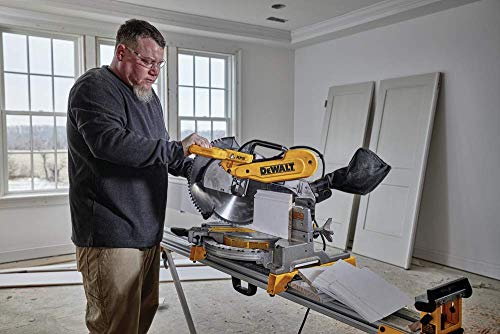 The Dewalt miter saw may not turn on, or miter saw stopped working completely. A variety of issues may cause such a problem. The main issue may be the Saw is locked up and needs to be unlocked.

You can also check the power cord if the lock-off button has been released. Ensure it doesn’t wind itself or damaged. The batter level for your miter saw should also be looked at.

The indicator will inform you when your battery is fully charged or not. If your chainsaw wouldn’t start after confirming the three items.

This could be a mechanical problem, and you may need to contact Dewalt for maintenance and repairs.

To lift your Dewalt miter saw, you have to turn or twist the pin in an outward or inward movement. When the pin is released, your miter saw lifts up automatically.

If this doesn’t happen, you may have twisted the pin incorrectly, depending on the model. It could be a problem of the blade or cover guard being dirty or stuck.

You need to clean the blade and the guard to ensure the miter saw lifts up as required. 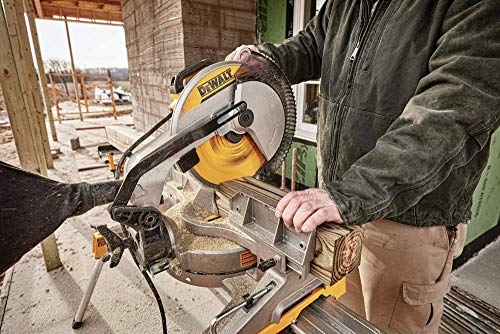 Just like any power tool, Dewalt miter saw is not immune to getting jammed while using it or when starting. The miter saw ensure you get precise cuts and angles on wood.

You don’t want to miss getting the perfect cut or pre-set angle while working on a client’s project. That is why you need to know the reasons why this might happen.

The main cause of Dewalt miter saw bevel stuck involves not releasing the bevel when working with compound or sliding miter saws.

The adjustment has to be made to help you get the required angle. Other causes may entail dust build-up, or wrong storage of your miter saw.

Ensure you clean your miter saw after every use, grease the moving parts, and store in a clean area.

You may have a miter saw stuck in an up dangerous position. The lock-on button may have been pressed accidentally, and you have to release it so your miter saw may slide.

In a Dewalt miter saw, a knob has to be pressed so the saw can slide. 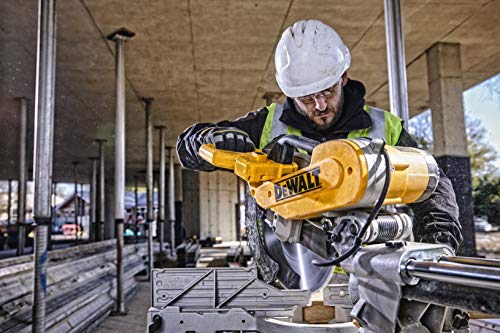 You may have noticed that your miter saw won’t rotate as it has before. Such a problem can be frustrating to any carpenter.

Troubleshooting the problem requires you to check on three things, which include the locking mechanism, dust build-up, and poor maintenance of the Saw.

You need to release the required lock so the saw rotates as it should.

The sawdust builds up under the fence or between the turntable, and the base will hamper the rotation of your miter saw. You have to clean it using a vacuum at every angle or hit with compressed air.

Your miter saw also needs to be adequately greased by removing the fence and accessing the turntable pivot to allow smooth rotation.

When you are working on a miter saw, take various precautionary measures. If you don’t take these measures, you may end up hurting yourself or damaging the miter saw. Here are some of these measures.

Unlocking the Dewalt miter saw is simple, as outlined in the ten steps. You only need to know which unlock function you need to release to undertake adjustments or other activities to ensure you get the correct and precise angle cuts.

Although the models of Dewalt miter may differ a bit, the process is the same for all of them.

Take precautionary measures when unlocking your miter saw to avoid getting hurt in the process. You can also refer to the Dewalt miter saw manual to understand the basic concepts fully.

Take action now and use this guide on how to unlock a Dewalt miter saw to actualize your project fully.