A Miter Saw or most commonly known as the ‘chop saw’ or ‘drop saw’, has been present since the 1970s, and is a very essential and basic tool used by many construction workers, woodworkers, and carpenters. It allows them to make a variety of accurate angled cuts or trims, and this, in short, is the sole purpose of a Miter Saw.

Over time, the development of this machine has allowed it to make cuts or trims at a vast range of angles, making it very useful to many workers, especially woodworkers. Some basic application of this fine machine includes crown moulding, door frames, window casings, trimming of wood, and much more.

But only having a Miter Saw isn’t enough. Knowledge of how to replace its blade is also very vital, and a worker should know how to do it him/herself. Following is a DIY step by step guide on how to change a Miter Saw blade.

But before knowing how to change a Miter Saw blade, we first need to know the components of a Miter Saw and what their respective functions are so that the user knows what he/she is doing while withdrawing and restoring a Miter Saw blade, making it easy for beginners as well. Components of a Ryobi Miter Saw 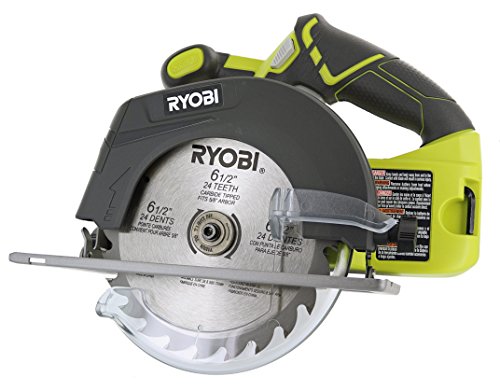 The components mentioned in the diagram are a basic setup of most Miter Saws. Some may have extra parts, but the features listed below are quite common in a lot of the Miter Saws.

As mentioned earlier, to have a better understanding of a Miter Saw and to perform any technical action on them it is very important to know the components and therefore know what they are used for, so that even a beginner can perform well.

The handle is used to lift or bring down the blade towards the object that is to be crosscut or trimmed. The handle has the power button integrated, which gives the user control over the blade.

Not to confuse this with the main power supply, as we’ll need to know the difference between the latter and former for replacing the blade of the Ryobi Miter Saw.

The blade guard envelopes around the blade, creating a barrier between the user and the blade, protecting the operator from any harm during the cutting of objects.

The top half of the guard is connected to a hinge, making it completely stationary, while the bottom half is moveable, and can be retracted to withdraw the old blade, and replace it with a new Miter Saw blade.

Due to the lower half being connected to a hinge, the lower part of the guard automatically swings open as it is lowered down to cut the piece of object.

The table is part of the Miter Saw on which the object to be cut is placed on top. It’s a solid and balanced surface, providing support to the object while it is being cut, minimizing any risk of movement of the object.

It also is connected to the Saw, providing stability and support to the Saw, completing the whole machine within itself. In the table is present a slot, which allows the blade to move into while cutting or trimming any object.

The fence is attached to the table perpendicularly, to which the object is placed to provide even more stability, accuracy, and precision for cutting. The more stability is given to the object, the better it can be measured and cut or trimmed into, providing accurate results.

A vise grip is a component mostly common present on Miter Saw’s, either on both sides or at least one. The purpose served by the vise is to provide stability to the Saw whilst it is being lowered for the cutting, or it can also be used to hold longer objects in place while they are being worked.

The cutting or trimming action of the Saw is done by the blade. A Ryobi Miter Saw blade size is usually 10 inches. There are different sizes of blades present.

The Miter saw’s scale is used to show the angle you are cutting at when making any degree of cuts. As the Saw is turned, the scale will also rotate with it.

An indicator is built into the table that points to what degree you are requiring. For a compound saw capable of cutting bevels, an additional scale will be present on the Saw’s arm that indicates the degree it’s angled at.

The Miter adjustment screw is used to angle the saw side to side, depending on the angle that you want to cut the object within. It is unscrewed; a lever is pulled at the bottom and can be moved side to side and hence rotating the Miter saw horizontally.

This action allows the Saw to perform not only straight cuts but also cuts at an angle. If it’s a Compound Saw, then the Saw can also be adjusted at a vertical angle.

A component present on most Miter saws. This component is used to collect all the dust that is made during the cutting of an object. It allows the environment to stay clean, as well as the machine itself, by minimizing the dust settling on the Miter Saw.

These are used to stable the Ryobi Miter Saw on the surface, and also allow larger objects to be placed for cutting or trimming.

What Reasons Cause The Blade To Be Changed? 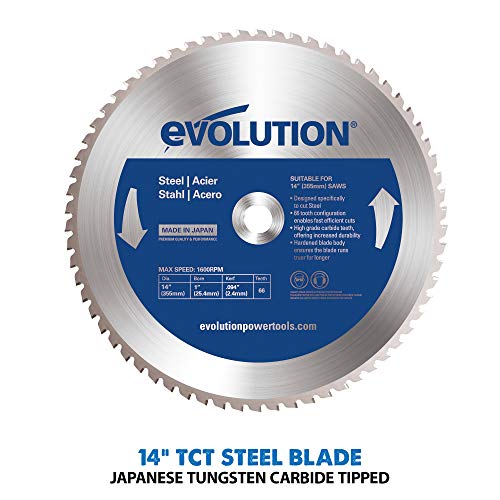 Precautions To Be Taken Prior Replacing The Blade

Secondly, before doing any operation on the Ryobi Miter Saw, make sure the main power supply is turned off, and the blade is stationary.

To replace the Ryobi miter saw blade, you should have these things available:

Apart from this, a first aid kit should be present nearby in case any accident happens during the replacement of the blade on the Ryobi Saw Miter. 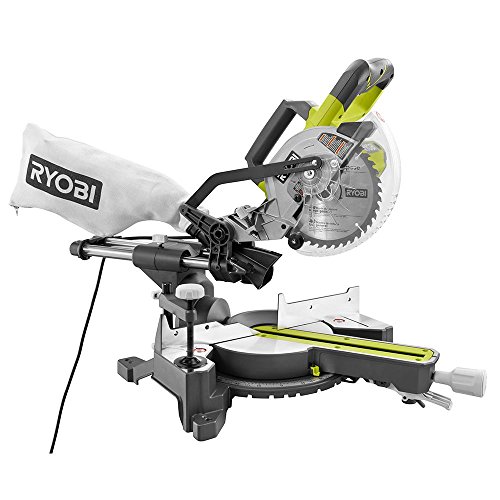 As mentioned up above in the precautions section, make sure to wear all safety wear,

On top priority, make sure that the main power supply is turned off, and the blade is stationary. After 10-15 seconds of power turned off, it is then advisable to touch the machine.

You’ll first want to take the guard cover out of the way to expose the blade bolt, which we’ll need to be told for the next step. For that, you’ll have to loosen the screw which is present near the centre of the guard cover. Loosen it slightly so that the hinge attached to it can be released.

Do not unscrew it completely. Once done, retract the hinge from the screw, and push the guard cover up and out of the way, leaving room for the blade to be able to be taken out easily.

Step 5. Press The Spindle Lock And Fix The Blade From Rotating

After a second or so, the spindle lock button will be locked down by a click sound, and the blade will be fixed, stationary, and unable to rotate. This step is a very vital, or else the Ryobi Miter Saw bolt would not open.

The blade that has left-handed threads will require the bolt to be turned clockwise so that it untightens. Be sure not to turn the hex key the wrong way or else you might end up stripping the bolt, making it very hard to open.

When the bolt is untightened, remove the outer washer, and be sure not to remove the inner washer. Lift the blade from the spindle and pull it out gently. Take your new Ryobi Miter Saw blade, and replace the old one with the new one by fixing it on the spindle and putting it in place.

Place the outer washer in place, aligning the flats of the washer and spindle. Relax the spindle lock button by unlocking the rotation motion of the blade, and tighten the blade bolt.

Make sure to tighten it the opposite way of which it was untightened, or simply tighten in the direction that is opposite to the direction of the arrow sign on the Ryobi Miter Saw.

Keep in mind that you don’t want to tighten the bolt too much so that you don’t end up stripping the bolt. Just tighten it enough and not excessively.

Place the guard cover down, and the guard down until the hinge meets the screw, and then tighten the screw with your Philips screwdriver. The same goes with this screw too: be cautious only to tighten it enough and not over tighten it.

Warnings To Be Noted

Problems That Can Arise During Changing Of Blade

If it’s a brand new Ryobi Miter Saw, it is usual that the company may have tightened the bolt more than expected. Apply a little more force while you are opening the bolt to let it loose.

If it’s not a brand new Ryobi Miter Saw, then the chances are that the bolt has been stripped. To solve this, use a Ryobi miter saw blade wrench and open the outer bolt so you can release the blade from the spindle.

The Blade Keeps On Spinning

Gently give it a nudge and lift it off the spindle.

How Do You Know The Blade Has Been Changed Successfully

Lower the blade arm, turn the main supply on after ensuring all bolts and screws are tight and press the power switch for a short amount of time, say 5-6 seconds.

If the blade is normally rotating without any interruptions, then the blade has been changed successfully. If it does not then check all the bolts and screws that they are properly fitted and tightened, and that should solve the issue. 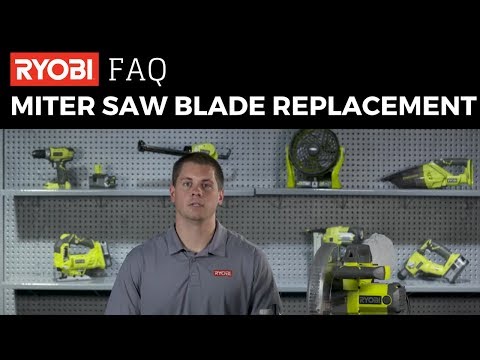 A: Discussed in the ‘Problems That Can Arise During Changing Of Blade’ section

A: Regardless of the size of the blade, the method for changing a Ryobi Miter Saw is the same.

Q: How To Remove And Replace The Guard On The Ryobi Miter Saw

With the help of this detailed step n step guide, changing a Ryobi Miter Saw blade could not be any simpler. Make sure to first read every step carefully before proceeding. And always proceed by taking safety precautions first. Be sure to have the right tools, and if you face any problems, always look for expert suggestions.

2. How to Unlock a Miter Saw – Hands-on Step by Step Guide

3. How to Cut Baseboard Inside-Outside Corners with Miter Saw (2020)

To Learn More About Woodworking and Carpentry Visit at iSaw Guide Home.